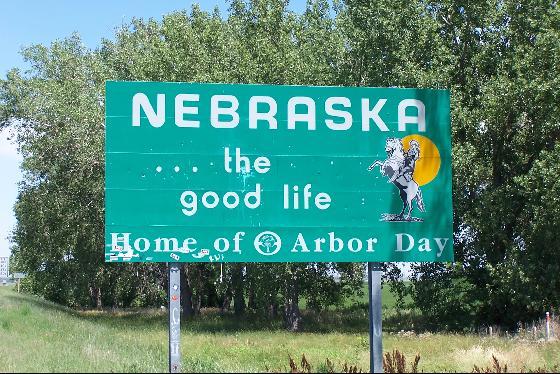 In the middle of a busy evening last Friday, Hannah, my favorite fifteen-year-old daughter, intersected my path with a silly grin on her face and that sheepish look in her eyes, and said something like, “Dad, I wanna go to Nebraska.”

That statement was followed by a more sheepish grin, with a blush washing over her face, and braces busting out everywhere.

“What?!”  I replied in my best loving, gentle, nurturing fatherly voice.  “What are you talking about, you weirdo?”

“I wanna go to Nebraska.  Please?  I really wanna go!”

“Wha-what?!  Why?  When?”  I replied with gentleness and support for her obvious neurosis (and a growing concern about whether the therapy would cost more than the braces).

“Tonight, or tomorrow, or whenever.  Just soon.  I need a road trip with road trip music.  Please?”

So, let’s get this straight, I’m in the early stages of what will be a very late night, I have a 6am appointment for coffee, my wife will be away all day tomorrow praying, scrapbooking, and socializing through her last moments before baby 11 arrives, leaving me with the other 10 or so fabulously active children, I have a men’s-movie-night date on Saturday night, and seven-thousand-or-so minor obligations on Sunday, and my most-wonderful daughter wants me to take her to Nebraska, right?

Why does she want to go to Nebraska?  She wants to play tennis there.  No, she doesn’t play tennis.  Ever.  But she wants to do that in Nebraska.  And, she wants to listen to road-trip music.  While on a road trip.  No, driving to Walmart doesn’t count as a road trip, apparently.

We left the house at 10am on Saturday for adventures unknown in Nebraska and returned 7 hours later after adding almost 300 miles to the odometer.

Apparently, they don’t much believe in tennis in Nebraska, at least not in Kimball or Sidney.  The kid we stopped to ask on the street in Kimball said they mostly just play football.  Hmmm.  Should have known.

In spite of the adversity, we did find an old tennis court – at least the mostly faded lines on the concrete seemed to indicate the ruins of an ancient field of battle that must have had rules similar to tennis.  (Maybe Nebraska boys play football on a miniature concrete field?)  There was no net.

We had one tennis racket and two racquetball rackets and no tennis balls for the 11 of us (9 of my kids, our friend, Paul, and me.)  We figured that with only the relics of a tennis court to be found in the whole state (or, at least the part we saw), it would be difficult to find tennis balls.

The dollar store had some.  They were dog toys, and they didn’t bounce much, but we got a pack of 3 for a dollar.  We played tennis.  All of us, and, yes, we fought over the rackets.  Some of us cried.  Most of us were just cold.

So, I ask myself, in retrospect, if there’s a possible connection here to anything like what Jesus had in mind (yes, I’m bringing Jesus into this mess, now) when he had these gentle, loving words for his friends, the Scribes and Pharisees:

“I’ve had it with you!  You’re hopeless, you religion scholars, you Pharisees!  Frauds! Your lives are roadblocks to God’s kingdom.  You refuse to enter, and won’t let anyone else in either.” (Matt. 23:13 MSG)

I mean, who am I to stand in the way of a 15-year-old on an important, impossible-to-understand mission?  What, you don’t get the connection?  You can’t imagine Nebraska having anything to do with God’s kingdom?

I think there are a few places in scripture which make obscure references to God’s people being like gates or doors.  Every door I’ve experienced is intended to move upon request.  Otherwise, it’s not a door, it’s a fence or a wall.  Some doors need keys, or lock picks, but still.

Jesus seemed to think his little friends weren’t very good doors.  They were just in the way.  They were barricades.  They were bouncers with bad attitudes.  They missed the point.  They had the keys to the kingdom, but they weren’t using them.

In their stubbornness, they ruined themselves and oppressed the people they were supposed to be supporting and stewarding.

Is anyone waiting for you to move out of the doorway?  Are you an obstacle?  Did you throw away the key?  Are the hinges rusty?  Have you imposed your own boundaries in areas intended for open range?

I mean that in the nicest possible way, of course.

Do you have to go to Nebraska or be impulsive to be a good door?  No, probably not, but rust and bad habits form slowly, and sometimes you have to open wide, using a little WD-40 when necessary, just to be sure you still can.

You have to be careful to avoid getting stuck in the shut position.

All I know is that I was trying to be a barricade, but I failed and succumbed to the pressure, and the momentum took me to Nebraska.  I don’t get it right most of the time, I guess, but I think I got it right that time.

I can’t imagine a more rewarding experience.  Have you seen Nebraskan tennis courts in November?  I highly recommend it.  Get the tennis balls with the paw prints.  And tell them who sent you.

12 thoughts on “nebraska, tennis, and the good life”

This site uses Akismet to reduce spam. Learn how your comment data is processed.